OSGI Explained: Extending Your Software to Embed an OSGi Framework

You have your software in place, but you need a better way of allowing your technical users to extend the platform. Most Java developers are aware of OSGi, but embedding an OSGi framework into your product seems like a huge undertaking. Further clouding the path is the uncertainty of exactly how OSGi works. For many Java developers OSGi feels more like trying to navigate the open sea rather than something they would want to play with.

OSGi (Open Service Gateway Initiative) is a Java framework used for developing and deploying modules and components. It focuses on encapsulation and loose coupling of functions which gives many benefits to the developers, such as modular functionalities that are easily movable between source codes and testing which doesn’t involve endless dependencies.

How does OSGi work?

OSGi is a set of specifications that define a dynamic component system for Java. These specifications allow for a development model in which an application is composed of several components, and then packed into bundles. These components communicate locally and through the network via services.

The goal is to make the applications core code as small as possible. This code itself may be highly coupled to a number of components.

The components are the reusable building blocks for your application. For example shopping cart functionality for your e-commerce website, or a payroll application within your employee management software.

OSGi enables components to hide their implementations from other components whilst exposing only relevant data to other components via services. This stops components from accidentally modifying data they shouldn’t have access to, and also keeps dependencies under control.

In an ideal OSGi application, all links between components are done through services. Services have an API that is defined within a java package. The API consists of classes and/or interfaces that are needed for collaborations between the service providers and consumers.

A bundle is a package for all of the OSGi components, containing them and whichever resources they need to work. Bundles are explicit in their requirements on the environment and the capabilities that they can provide.

OSGi has a layered model as illustrated in the image below: 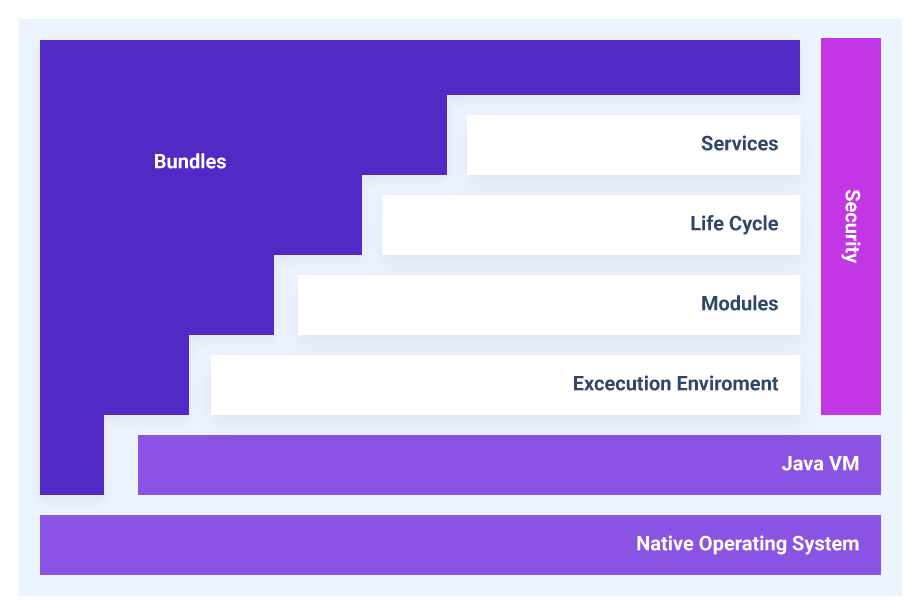 Why Use OSGi within my Existing Software?

Some of the primary reasons to embed OSGi within your application is so that developers can:

Which Library to Use?

We, at dotcms, decided to use Apache Felix. The Equinox Eclipse project is also a solid option depending on what you are looking to do. Felix stays pretty close to the latest spec but both libraries have similar feature sets. In addition, Felix is better built to be embedded into an existing WAR. Both Equinox and Felix can do this but Equinox recommends, by default, embedding your server into Equinox, not the other way around.

This is how Eclipse runs, which is what Equinox is primarily built for, so this makes sense.

If you use Jboss or Weblogic you can use the OSGi implementations they ship with, but we prefer to remain more agnostic and not rely on the underneath app server for something like OSGi.  As of the writing of this article, none of the other major implementations implement OSGi framework spec 6.

How to Embed OSGi

At dotCMS we were faced with the issue of needing to provide our users with the ability to deploy what we call Dynamic Plugins. A Dynamic Plugin is a plugin that can be deployed and undeployed at runtime, meaning without a server restart. The plugins needed to be able to override current functionality as well as add new functionality to our existing WAR. This involves adding Servlets, Spring Containers, Filters, Java Classes, REST Endpoints, etc.

In our case, we weren’t starting a new project where the entire app would be centered around OSGi (i.e. Eclipse), we already had an existing WAR on which we needed to add OSGi.

The great news is that OSGi is not difficult to embed. Essentially it boils down to the config and code example shown below.

First you need to add the library dependency to your project. This would be adding the JARs for either Apache Felix or Eclipse Equinox. Next you need something to start OSGi. Being a web application, we used a listener:

As an example consider the following:

OSGi is a great way to allow developers to deploy new functionality in an existing web application while keeping it protected and separate from other things within the main application. Following the instructions above, and heeding our lessons learned, it is not difficult to embed OSGi within your own application.

Get a complete demo of the dotCMS Content Management System. This webinar covers all the major features of the platform, including editing and managing content, creating pages, creating content types, building custom workflows and more.

Maintaining or achieving a global presence requires effective use of resources, time and money. Single-tenant CMS solutions were once the go-to choices for enterprises to reach out to different market...