Introduced in version 22.10, the JSON field allows you to store, access, and manipulate semi-structured data within your content in the form of JSON objects. 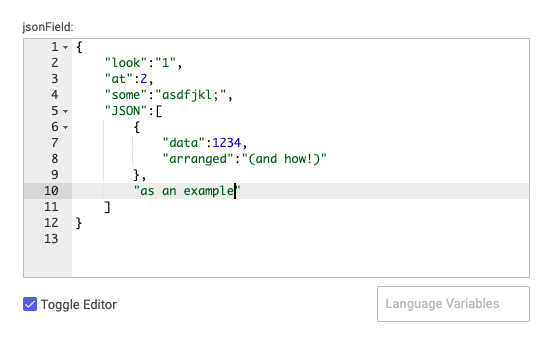 You can add a JSON field to a content type in the same ways as any other field, either headlessly or through the user interface: 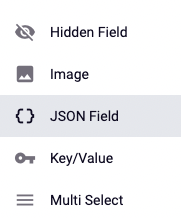 Note: This section focuses on content objects in Velocity; retrieving the field's data headlessly, such as via a CRUD operation, returns a standard JSON string.

Once you have loaded the field into the Velocity context, either through a built-in content object or a manual content pull, the data is mapped by default, and can be traversed through its keys.

For example, if a URL-mapped content type has a JSON field named jsonField containing the following data, as seen in the screenshot above:

The JSON object is accessible by calling the JSON field through the relevant content object — in this example, $URLMapContent.jsonField would be applicable. If called directly, this will return the JSON data in its entirety; to access a data member individually, call the relevant key as an object property.

Here are some examples of calls to data members of the JSON above:

Using the keys as properties is the same as calling the .get() method with that property as the argument. That is, the following two expressions are identical:

Performing a #foreach directive over the JSON field's data object directly will return values only. For example:

To access the JSON without excluding the keys, instead access the field as a hash table, using the keySet() method. For example: