Last Updated: May 25, 2022
documentation for the dotCMS Content Management System
Spotted a problem? Select it and click

A number of system properties define and control how dotCMS displays and handles content in different languages. The most important property is the default language, which is used by default for all queries and content retrievals, and is used in the default language fallthroughs.

There are two ways to change the default language:

In both cases, remember to ensure that your site has versions of your content in the new default language!

Changing the Default Language via the Admin Panel

The recommended way to change the default language is through a dropdown selector in the admin panel — a feature introduced in agile release 21.11 and included in LTS releases from 22.03.0 onward.

Under the Types & Tags (or Content Model) category, select the Language portlet, right-click the language you wish to make default, and select the Make Default command. 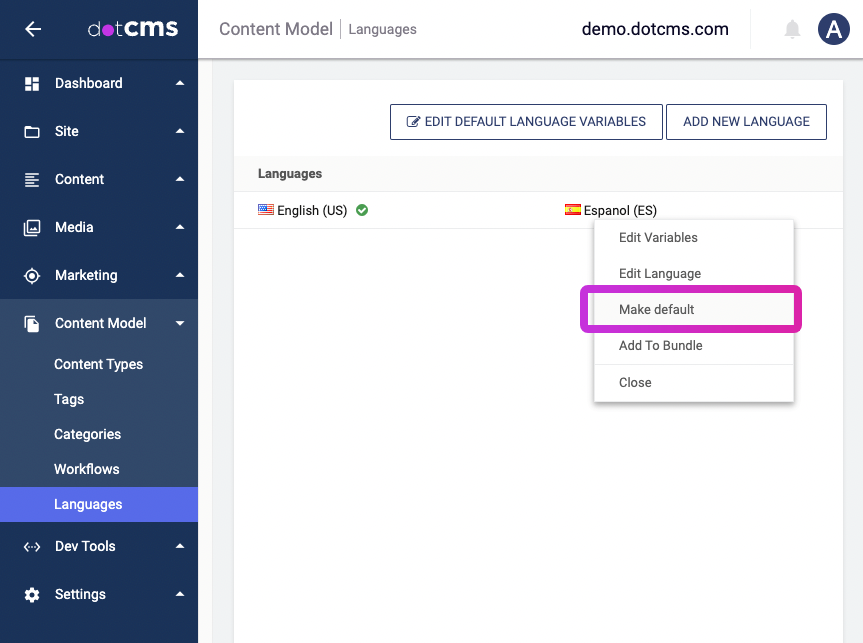 After a language is selected as default, the changes will propagate in the background; the exact time this will take can vary by data sets.

The method below details how to change the default language on a version of dotCMS prior to 21.11. Because of the relative complexity of the process — both in execution and support — dotCMS advises that it may be both simpler and safer to upgrade your dotCMS installation and instead use the method described above.

Nevertheless, for thoroughness, we have retained the instructions for the legacy procedure below.

If you change the default language on a site with no content in it, then all new content you create will be created, by default, in the new default language, and no additional work is required.

For File Assets, WebDAV is recommended, since it allows you to update all the files in bulk relatively easily. To update non-file content in bulk, please use the REST API.

This is expected, because the Theme files will not exist in the new default language. The Theme, and any Pages that use it, will only display properly when the Language is explicitly set to the previous default language (e.g. U.S. English).