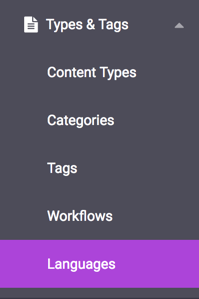 To add another language to your site, click the Add New Language button in the Languages tab.

Enter the two character Language Code and Country Code and then fill out the complete descriptive name of the Language and Country being represented as in the image below.

After saving the new language users will be able to open, search for, or create a piece of content of any Content Type in the new language by clicking on the language flag icon that is now displayed. When adding or editing content, simply click on the select box provided by the Language field to enter content in a particular language.

The initial dotCMS configuration specifies English as the default language. However the default language can be changed to any language by editing the System Language Properties in the dotmarketing-config.properties file. Note: It is strongly recommended that changes to this file be made through a plugin.

To edit or remove a language, right-click the language name in the Languages list, and select Edit Language to open the Language properties.

To edit the Language properties, change the appropriate properties and press the Save button.

To delete the Language, press the Delete button.

You can not delete a language if you have content which was created in that Language. If you attempt to delete a Language which has content, the delete will fail and an error message will be displayed:

Since you can not delete just a single Language version of content, it is strongly recommended that if you wish to remove a Language, you simply unpublish and archive all content in that Language instead of deleting the language itself.