Cross-platform mobile apps are on the minds of both consumers and developers. Software frameworks capable of building native-like apps without using Swift for iOS and Java for Android, have changed the playing field.

Frameworks like Flutter and React Native have taken the mobile development world by storm and are the two most used cross-platform frameworks in the market, according to Statista. 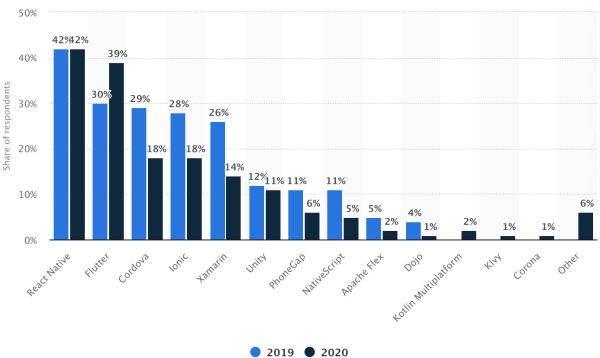 Both React Native and Flutter are similar, and give you cross-platform functionalities, all using one codebase, hot reloading, and the providing tools to build an excellent UI. But that doesn’t mean they don’t have their differences.

Let’s take a look at their similarities and differences, and explore what developers can do with them.

First created by Facebook for their native mobile development, React Native became open source in 2015. React Native is a popular JavaScript framework that primarily focuses on the native rendering of Android and iOS applications.

Instead of using web components like “H1” or “div,” you can use JSX syntax components provided by the react-native library for mobile development. React Native also uses a virtual DOM, but instead of manipulating the DOM, you use it to communicate with the UI elements.

For JavaScript users, React Native can be pretty simple to master. You can get started by installing the create-react-native-app package using npm and then start building a new React Native application.

Created in 2011 by Google, Flutter is an open source mobile framework that works with another Google product, programming language Dart. Developers usually use Flutter as a UI toolkit to build cross-platform apps with a single codebase.

Dart is an object-oriented programming language with C-style syntax that works with both native code or JavaScript, making it a flexible choice for programmers who feel comfortable working with JavaScript but want to try a different approach.

According to Github, the usage of Flutter as a framework has grown in 532% in the last year, which makes it a significant contender in the mobile frameworks space.

However, let’s not lose our heads yet. Flutter is growing, yes, but that doesn’t mean it’s perfect. Let’s analyze the pros and cons.

With so many competing frameworks, it’s never easy to choose the best one for mobile development. Let’s take a look at how these two frameworks compare..

Both frameworks differ in their installation. To install React Native, you need Node Package Manager and developers with a JavaScript framework won’t find it difficult to install. Flutter users need to download a binary source platform from Github if they develop on Windows, but macOS users can download the Flutter file and use a path variable.

React Native uses JavaScript for app development, which is the most popular programming language around. On the other hand, Flutter uses Dart, which might not be familiar for developers used to JavaScript development. However, users accustomed to Java and C++, will notice some similarities with Flutter..

React Native performs almost as good as native languages like Java or Swift on the performance front but doesn't achieve the same performance levels. However, React patches those issues by enabling developers to add native code in the application. Flutter executes an experience that’s closer to native apps because Dart code is compiled into native code, which makes it faster than React Native.

Flux, React Native’s application architecture gives developers the tools to build client-side web apps following the MVC framework. In this case, React Native takes part of the view and Flux of the model. Inspired by Reflux.js architecture, Dart, Flutter’s architecture, implements a data flow composed of actions, stores, and storewatchers based on Flux but modified to be used in Flutter.

Despite being backed by Google, Flutter is still young when compared to React Native. Support for React Native abounds, and you can find plenty of information whereas with Flutter, support is still in its infancy, but as the platform user base grows, we will see more support.

Choosing Between Flutter and React Native

Like most things in life, there’s no one-size-fits-all solution here. You need to judge each framework on a case-basis and pick the one with the capabilities your project needs. Nevertheless, there are some cases where one framework is better than the other. Let’s explore them together.

With dotCMS, mobile developers can build a seamless digital experience platform that will support their development process.

Thanks to our highly open architecture and growing set of REST services, it’s easy for developers to integrate different technologies with dotCMS to improve the functionalities of the digital experiences you’re building.

For instance, dotCMS’ page layout API enables developers to leverage our Layout as a Service model when building frontend apps.

With an API call, developers can retrieve all the elements for a page as JSON and then integrate them with any mobile framework of your choosing. All of these integration points make dotCMS a highly interoperable CMS capable of connecting your framework with the best software for your task.

If you want to learn more about how dotCMS provides you with a Layout as a Service, take a look at our documentation and see how you can integrate dotCMS to your development workflow.

Build and deploy your Jamstack with NextJS and GraphQL

Take advantage of all the features of NextJS to build a top-notch SPA that has better performance, higher security, and scales quickly.